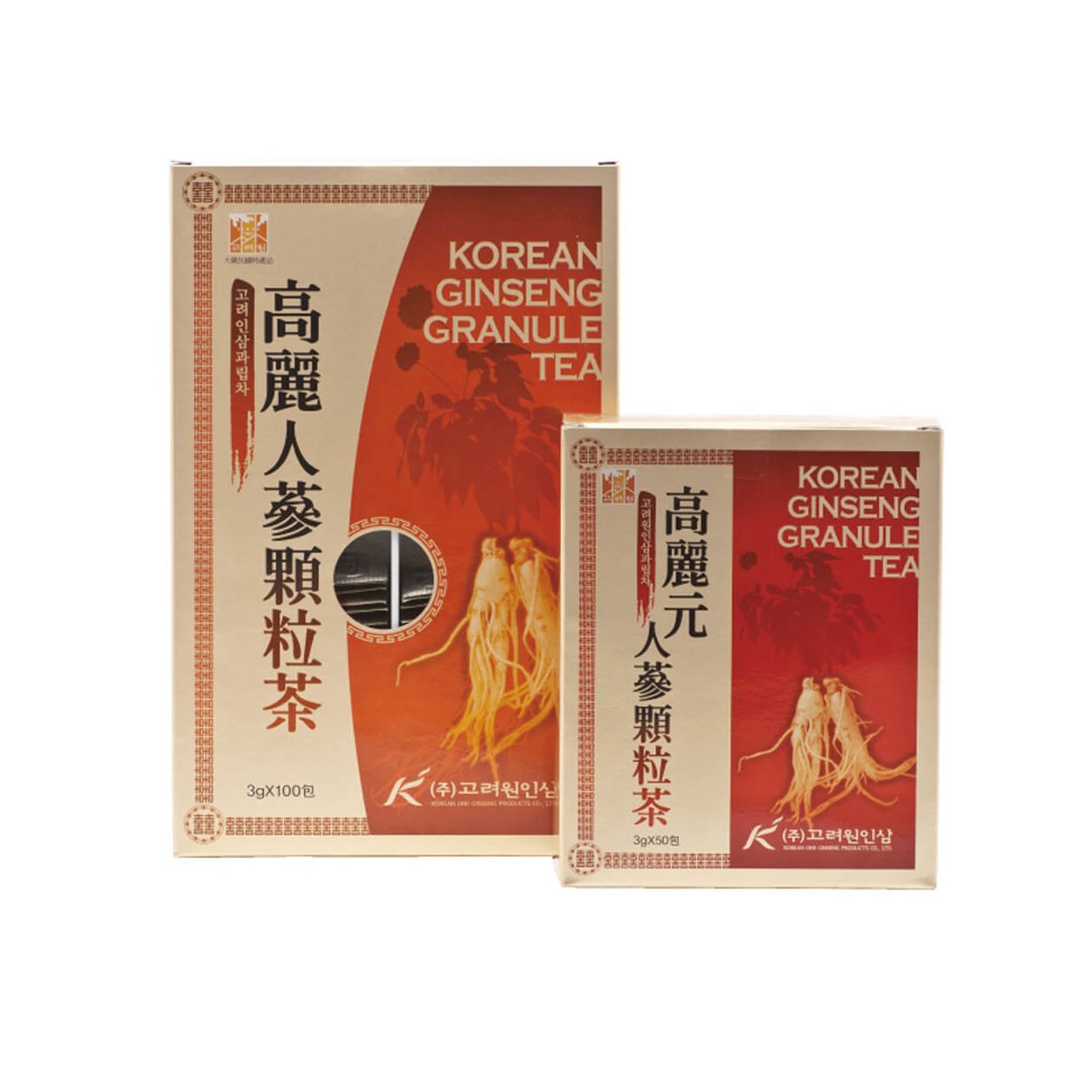 This Korean Ginseng tea is manufactured in granular form from the extract of Korean ginseng and is designed to be taken any time, any place.

White Ginseng is a 4 to 6 year old ginseng that is sun-dried, or dried by indirect heat after its thin layer of skin is peeled away. This technique helps to keep the original shape of the plant intact as well as reducing water content to about 14% or less. Drying in the sun bleaches the root to a yellowish-white colour.

Unlike Red Ginseng, the unique thing about White ginseng in terms of processing method is the fact that it is not steamed but instead naturally sun-dried.

Store in a cool and dry place. Made in Korea.

Directions
Put one or two teabags into a glass of cold or hot water and stir well until dissolved. Add honey or other sweeteners if desired.

Korean ginseng, a medicinal herb, naturally exists in only three regions: Korea, Manchuria and eastern Siberia. The Korean Peninsula is the best place to grow ginseng, because ginseng has stringent requirements for the plant's growth — temperature, plenty of rain in the summer, correct conditions in the winter, etc.

The value of Korean ginseng was known in the world in the 4th century B.C. In the book Shen Nung Pen-Ts'ao-ching, translated as "The Book of Herbs by Shen Nung" or "The Divine Husbandman's Materia Medica", ginseng and gold fragment are described as important preparations for the "elixir of life" to produce eternal youth and immortality (Bae 1978). Although the true authorship of this book is unknown, it was revised sometime between 456-536 C.E. by T'ao Hung Ching. This book is purported to represent the early experiments of the legendary emperor Shen Nung -considered by many to be the father of Chinese agriculture, medicine, and acupuncture.

Ginseng was mentioned as a 'tonic for long life' for the first time as early as somewhere between 48 and 33 B.C. in Interpretation of Creatures, written by You Shi of ancient China.

Ginseng has long been used in maintaining physical vitality throughout the far eastern countries, including Korea and China. Ginseng root produced in Korea has been highly praised and has since gained the name 'Korean Ginseng'.

Other forms of ginseng are found in North America, Japan, China and Russia, but they are different to Korean ginseng in many ways. Korean ginseng, Panax ginseng C.A. Meyer, belonging to the Panax genus in the family Araliaceae, to which six species belong.

Since ancient times, only Korean ginseng has been used medicinally, whereas several other Panax species have only come into use in recent days. Eleutherococcus senhicosus does not belong to the genus Panax, but it is called Siberian ginseng due to the popularity of Korean ginseng. 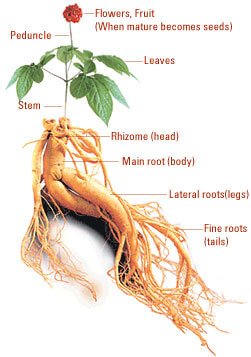 Korean Ginseng has a root system which includes the rhizome head, main root, and lateral roots from which numerous fine roots and root hairs develop.

The shape of Korea Insam (meaning 'in'-man) undergoes a process of transformation as the roots develop. In the first year of sowing, ginseng roots undergo about 17 months of elongation process (first 4-6 months) and flesh-up process (final 7-9 months) to become seedlings bearing heavy hair. The hair is trimmed off upon transplant in the second year of sowing. New lateral roots then begin to develop, and the length of the main roots and the number of lateral roots are set in the third year of sowing. In the fourth and fifth years, main roots flesh up and the lateral and fine roots grow fully to form the unique shape of ginseng roots.

Six-year-old ginseng which is used for manufacturing red ginseng has 7-10cm long main root (diameter 2-3cm) with several lateral roots and a large rhizome head. Its total length is about 34cm and weight is 40-120g (in some cases, up to 300g). When roots are grown more than 7 years, root growth becomes distorted and ill-shaped, with woody skin and a higher rate of cavity, or inside-white occurring after processing.

More Information
Reviews 1
Write Your Own Review
Join our Newsletter